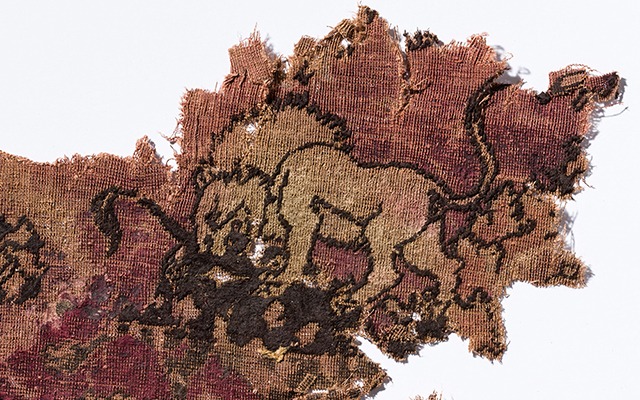 Please note: this is a news item from 2016. The information below is therefore (partly) no longer up-to-date.

A new treasure from the Palmwood wreck has been unveiled at Museum Kaap Skil. It consists of fragments of an unusual oriental carpet, salvaged from the bottom of the Wadden Sea after almost four centuries – just like the famous royal silk dress. For the scientists Ebeltje Hartkamp-Jonxis and Hillie Smit, it was as if they were presented with the remains of a painting from Rembrandt. The carpet fragments will be displayed in Museum Kaap Skil till mid-February 2017, in the exposition ‘Diving in Details’, which opened on 19 December.

You can make out floral and animal designs in the exotic carpet, including an impressive lion attacking a cow. Together with the RKD – Dutch Institute for Art History, art historians Hartkamp and Smit carried out an initial investigation of the materials, the weaving and knotting technique, the colors and the motifs of the thirteen carpet fragments. They think the carpet was possibly manufactured in Lahore, the Pakistan city located on the border with India, and dates back to the second quarter of the 17th century. Although oriental carpets with exotic motifs were very popular during the Golden Age, hardly any with similar animal figures have survived from that period. Just like the previously exhibited objects, this carpet confirms the unique character of the Palmwood cargo. After mid-February, the carpet fragments are temporarily no longer visible to the public. They will be further investigated and transferred to the House of Hilde in Castricum, the archeological center for the Province of North-Holland.

The exposition Diving in Details allows visitors to experience the scientists’ search for the answers of the many questions that have arisen with the discovery of the Palmwood wreck. Various lines of investigation are followed. The results from the historical, archeological and technical investigations come together in the exposition, which is continually supplemented as the research progresses. Via a large interactive touchscreen and display cases with varying objects, visitors at Kaap Skil can experience how the pieces of the puzzle are forming into a clearer picture of the ship and its cargo. The investigation can also be followed in the House of Hilde and via the website of Kaap Skil.

On Monday 19 December, the exposition ‘Diving in Details’ was opened at Kaap Skil by representative Jack van der Hoek and the alderman Eric Hercules. Prof. Dr. Maarten van Bommel from the University of Amsterdam (UvA) provided an update on the research developments. Van Bommel discussed the newest research techniques that are being applied. Various scientists are closely working together. Prof. Dr. Maurice Aalders (AMC-UvA), special professor of Forensic Biophysics, is involved with conservation and monitoring studies. The exhibit seals a long-time relationship between the scientists (UvA, Rijksmuseum, AMC), Museum Kaap Skil, Province of North-Holland, the municipality of Texel, the Diving Club Texel and the Cultural Heritage Agency.

Persian rug from the Palmwood-wreck

Red Bodice from the Palmwood Wreck

Persian rug from the Palmwood-wreck