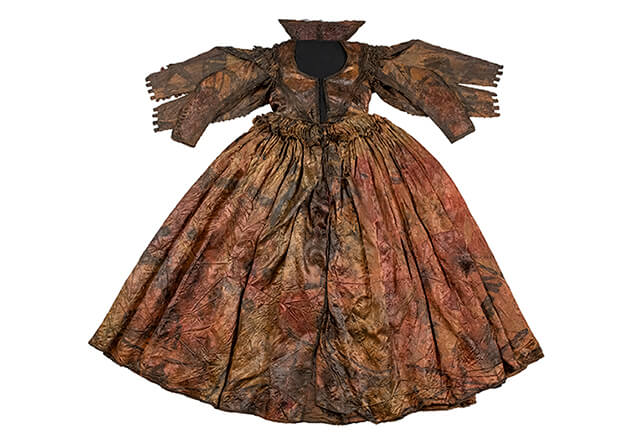 One of the top pieces in the collection at Museum Kaap Skil is a seventeenth century dress of royal allure, surfaced from the bottom of the Wadden Sea. The impressive silk dress was found in a shipwreck that was given the name ‘Palmhoutwrak‘ (Palmwood wreck). The precious garment is still in surprisingly good condition despite having lain for almost four centuries on the seabed. It is a unique find worldwide; hardly any clothing from the seventeenth century has been preserved. Scientists expect to need years to answer all the questions that the dress has raised.

The dress is made of silk satin, decorated with a woven floral motif. In the seventeenth century it would have been referred to as a gown or tabard. Although the dress now has a colourful appearance including cream, red and brown tints, it is probable that the Dress was originally a single colour. It is likely that the initial colourants have perished, whilst stains have occurred from residues of dye from other garments in the same chest.

The dress consists of a bodice with a pleated full skirt which fans open at the front. One or more underskirts would have been worn underneath. The bodice has attached sleeves, with loose-fitting ruffles and sleeve caps. Silk tassels would have adorned the sleeves and they would have been decorated with silver or gilded buttons. All that is still visible of the buttons are the impressions in the fabric. A stand-up collar of linen or lace would have been worn around the neckline, supported by a supportasse or rebato: a metal construction on the shoulders. The garment would have been further decorated with silver and gilded details on the collar, bodice, sleeves and skirt.

The style of the gown is very similar to that of Western European fashion in the early seventeenth century, between about 1620 and 1630. Various comparable garments can be seen on paintings from this time. There appear to be slightly more similarities with English costumes, but the gown would also suit the style of the Dutch Republic or other parts of North-western Europe. It is not inconceivable that the garment had been made in one country and was being transported to another location. After all, the gown was on a journey. For some time it was thought that the dress once belonged to the English countess Jane Kerr. This hypothesis has since been rejected.

The expensive materials used and the connection to the fashion of the age suggest that the owner belonged to the highest social classes and was very wealthy. The gown would have mainly been suitable for everyday occasions. For important occasions at court, such as coronations and weddings, garments would have been worn with more extensive use of silver thread and cloth of gold or silver.

The Dress and other unique finds from the Palmwood wreck are on display in a new, spectacular exhibition. A special oxygen-free display cabinet is made for The Dress, which will optimally preserve this showpiece and makes it possible to view it from all angles.

NB: Research continues to be conducted into the collection. For this reason, this article may contain obsolete information or outdated insights.