The textile finds which have made the Palmwood Wreck world famous include a second extremely unusual dress. Research has shown that it was probably a wedding dress. With the woven silver discs and embroidered patterns of silver thread it must have been, literally and figuratively, a dazzling dress! 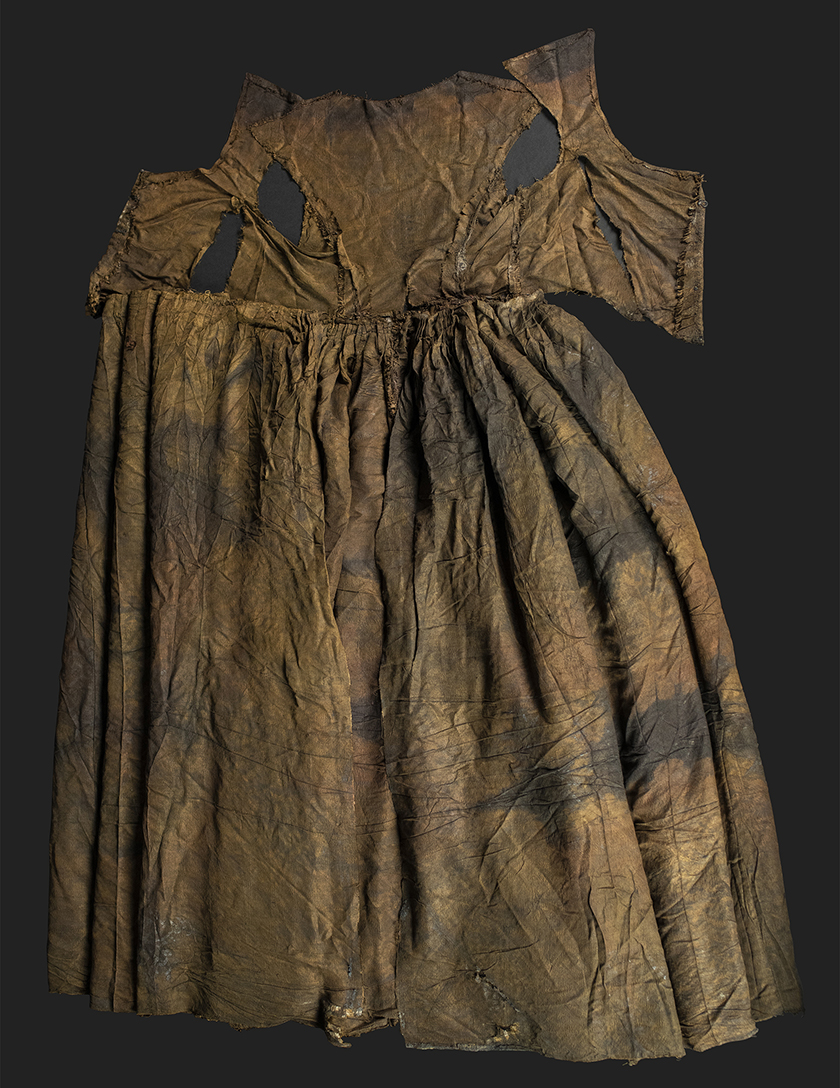 In comparison to the other dress from the Palmwood Wreck, the wedding dress consists of various separate parts. The main parts of the garment, consisting of the bodice and the skirt, are still attached. The fastening stiches of smaller parts, such as collars, sleeves and oversleeves, have possibly deteriorated. It is also possible that they were never attached to the dress. These parts were often only fastened with pins during dressing. The other parts have been found but are not all on public display.

At first sight, this appears to a brown-coloured gown but this would not have been the original colour. The dress was most probably made of lightly coloured silk (possibly white or cream) and the whole surface was covered with silver decorations. These consisted of small silver discs woven into the silk in the shape of love knots. This is a repetitive pattern of hearts knotted together: very appropriate for a wedding dress! Silver fades and decomposes rather quickly in the salty environment of the Wadden Sea but the traces and patterns of the original decorations are still visible.

As it was so richly decorated with silver, the dress would have had a formal, light and sparkling appearance. It must have been one of the most unusual dresses which a lady from the higher social classes of Western Europe would have worn in her life. The dress was suitable for special occasions such as engagements, coronations and marriages. If it was worn as a wedding dress, the bride would have been the dazzling centrepiece of the marriage ceremony. Which immensely rich lady in this exclusive dress would have promised her husband eternal fidelity, shall always remain a mystery. The style and origin of this wedding dress are very similar to the other dress from the Palmwood Wreck but the two dresses differ in size.


NB: Research continues to be conducted into the collection. For this reason, this article may contain obsolete information or outdated insights.