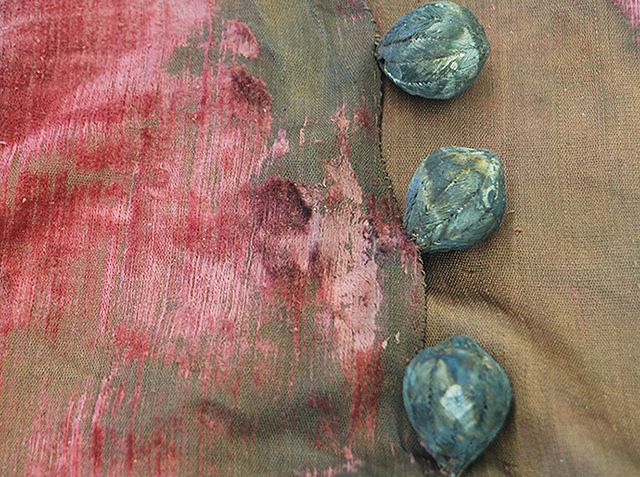 Please note: this is a news item from 2017. The information below is therefore (partly) no longer up-to-date.

From 16 to 25 June 2017, a new object from the Palmwood Wreck will be displayed at Kaap Skil: a unique seventeenth-century Ottoman kaftan. “Fantastic to once again be able to exhibit another beautiful garment from the Palmwood wreck”. Corina Hordijk, museum manager for Museum Kaap Skil, enthusiastically discussed the kaftans which the scientists investigating the find presented at the UvA on Wednesday 10 May. The scientists themselves are also delighted.

The seventeenth century dress which was presented last year is only one of the many hundreds of objects the divers from Diving Club Texel found in the Palmwood wreck. The team of researchers is working to catalogue the entire collection displayed two other oriental garments in Amsterdam on Tuesday.

Jenny Tiramani, from the English School of Historical Dress, presented the first results of her studies. This highly experienced scientist has already handled many beautiful things in her life, but even she could hardly find enough words to express her enthusiasm for the textile: “Superb, amazing, stunning”.

The scientists believe the seventeenth century kaftans could have been made in Eastern Europe or the Ottoman Empire. One of the kaftans is bright red and a rather small. This could have belonged to a child or a small woman. The other kaftan is in a much worse condition and could have belonged to a grown man. Various loose textiles were also found, including possible pillow cases of which the embroidery and decorations have been amazingly preserved. Lovely scrolls of flowers and oriental motifs decorate the pink silk.

One can think of various scenarios to explain why these garments were on board the ship. It’s possible that the costumes were worn by European representatives or merchants during official occasions and visits to the Ottoman Empire. They can also be gifts.

Because the research and conservation projects are nowhere near finished, the red kaftan can only be displayed for a short period and must meet strict conditions. Hordijk: “Eventually, the entire discovery from the Palmwood wreck will come to the museum, but that will take several years. Until then, the objects are only accessible for the scientists. The fact that we are able to exhibit the kaftan  to the public now around Pre-Sail Den Helder is a great opportunity”.

As soon as new research results are presented, they will be added to the touch-table in Museum Kaap Skil to allow visitors to follow the progress.

Extra information: What is an oriental kaftan  doing in a West-European wardrobe?

It is known that high-ranking Westerners adapted their clothing to the customs of the host when visiting the Sultan of the Ottoman Empire. From documents found in English archives, it appears that the garments that they wore and called vests were borrowed if necessary.

‘At all audiences, from the G. Sr. [Sultan] himself to the Kaimacham of Stambol, we give presents, viz., vests of cloth, silk, cloth of gold, silver, velvet, etc., and in most places we receive vests from them, which are a peculiar sort of garment, onely to be then put on by us, and the maisters of state wear them upon occasions up and down the Court. They are made like our sophisters’ [ Cambridge University academic gowns] gown, without a cape. The stuff is of white silk, flower’d with great branches … and, according to the dignity of the person, they are of cloth, of silver, or gold, or with more or less gold and silver wrought in the silk. There were 16 give amongst us. I sold mine for 6 ½ dollrs. My Ld.’s was worth 25 or 30; all the rest like mine, except the Treasurer’s, Secretary’s, and chief Dragoman’s, which were worth about 8 dollars a piece. I am confident this was a very antient custome, and is mean’d in scripture by changes of rayment, etc.

From the diary of Sir John Covel,
Chaplain to the English Ambassador in Constantinople, May 19th 1675

Sir Henry Lello, who sat at a banquet in Constantinopel, wrote in 1599:

‘… order was sent by the Gr Sr [the Sultan] that before our entrance unto him bothe I and my gentlemen should be clothed in vests out of his Tresorie, wch were there scarcely found, yet had I ii, and ten for my gentlemen; and so, in the company of the Vizeires, I entered into the presence chamber, where the Grand Sigior satt upon a cushion of red sattin most richly ymbrodred wth pearls, and all his chamber floored with Redd sattin Ritchly ymbrodered wth gould; and, omyttinge the sumptuousnes of the sight, coming to deliver my Ambassadge unto him, I first salluted him in her Highnes’ name; …

One of the hypotheses of the scientists is that the oriental garments were part of a wardrobe that allowed visitors to the Ottoman Empire to be properly dressed. Another is that these were gifted to European merchants or diplomats.

Oriental robe from the Palmwood wreck

Gunpowder flasks from the Palmwood wreck