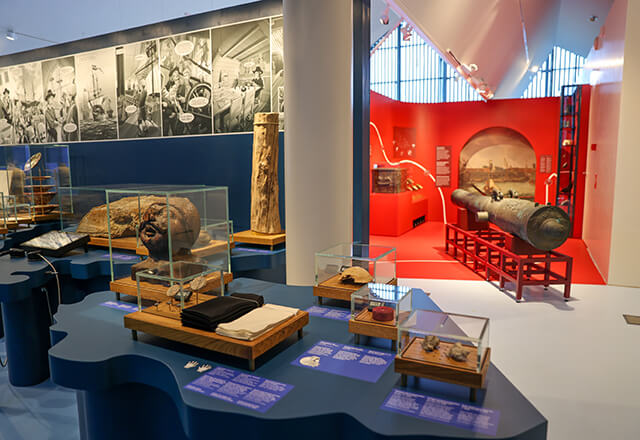 Adventure, wealth, trade and romance, but also exploitation, danger, slavery and poverty. Global trade in the 16th and 17th century knew many faces. These various aspects and the central role which Texel played in the era are brought to life in the new exhibition World Voyage at Museum Kaap Skil. Visit the four corners of the world with Texel folk from the past and discover their stories for yourself!

Stories from the seabed

Many dozens of shipwrecks lie on the seabed along the coast of Texel; sunk during the days in which the Texel Roads were full of anchoring ships. The wrecks have been preserved under the sand and piece-by-piece tell their own stories of centuries past. These stories and the unusual artefacts retrieved by divers from the wrecks are at the heart of the exhibition World Voyage.

Including the scale model

The exhibition is on the first floor of the main building at Museum Kaap Skil and continues the story of the gigantic scale model in the basement. In minute detail, the scale model portrays the Texel Roads around 1660, with diverse ship types and the activities surrounding them. Some of the ships would be bound, for example, for Suriname, whilst others stayed nearer home; sailing to Riga for grain or North Africa for edible oils. 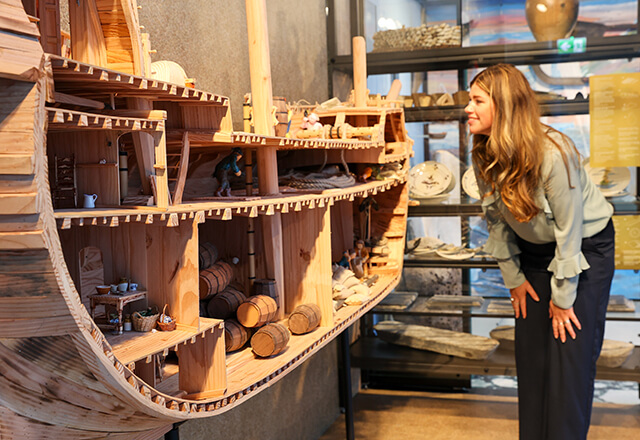 Inhabitants of Texel from the seventeenth century

In World Voyage, you can follow the ships to their destination. A centrally located compass shows the way and Texel folk from the past tell their stories, assisted by shipwreck finds. People such as Albert Gronders, who tells in ‘the north’ about Baltic Sea shipping. He knows what he’s talking about, as at the end of the seventeenth century he sailed to the cities around the Baltic Sea yearly in order to buy grain. If you go east, then Jacob Schagen will be your guide. As a young 15-year-old Texel man, he set sail for the Far East aboard the VOC ship De Jonge Lieve in 1762. Texel folk from the past also tell their stories about journeys west and southbound.

Alongside the adventurous and positive aspects of seventeenth century trade for Texel, World Voyage also explores its shadow sides. For example, the retrieved artefacts in ‘the west’ which were destined for a sugar plantation in Suriname. Tools with which those who had been made into slaves would have had to work with, alongside luxury objects meant to guarantee the plantation owners a comfortable life. Sunk near Texel and therefore never having arrived at their destination. 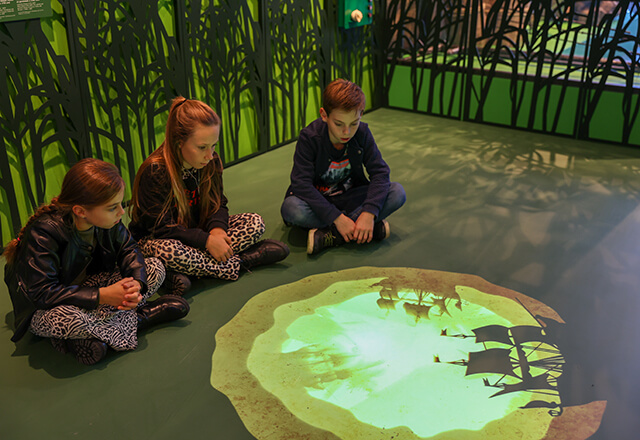 Ship in sight! The Roads of Texel and the world

The Roads of Texel