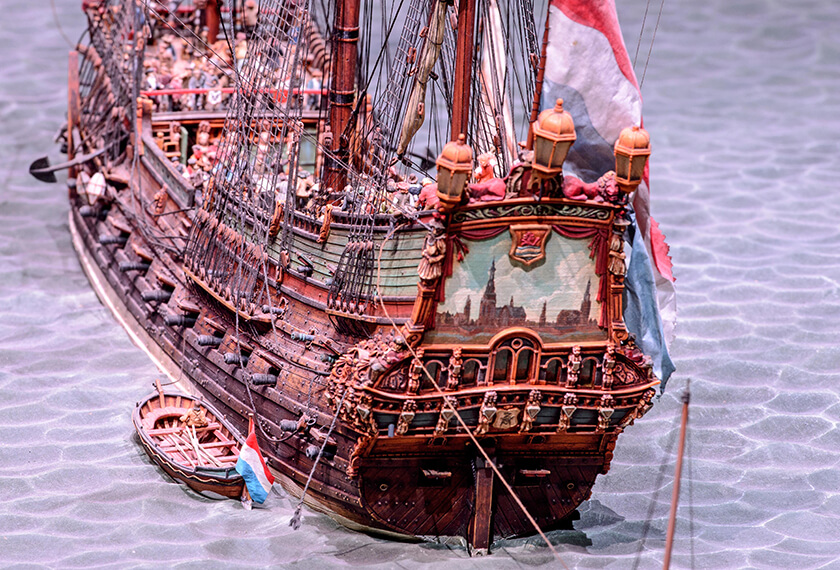 The Oranje was an East Indiaman. This type of ship was specially designed for the long voyages to the Indies, under the flag of the VOC. They had a large capacity for carrying cargo in order to bring back lots of trading goods.


The Oranje was 48 meters long and 11 meters at the beam. It was built in Middelburg in 1643, commissioned by the VOC. On the transom of the ship, a panorama of the city of Middelburg has been depicted. Every VOC room had its own flag. The flag of Zeeland was yellow/white/red. The ‘M’ for Middelburg is also visible. The Oranje was the commanding ship of the VOC fleet many times. In 1665, it was hired by the Admiralty of Zeeland for the war against the English. The ship was no party for the heavy English warships. After a long battle under leadership of Bastiaan Senten, which received much respect from the English, the ship perished.

The model is a copy of the Prins Willem in the Rijksmuseum and the transom of the ship is based upon a picture of the Oranje on the painting ‘Return fleet from Batavia’, by an unknown painter. The passengers are on board the ship for the first time. They look around unwittingly while at the same time keep an eye on the trunk containing their personal belongings. On the Oranje, the captains and officers from other East Indies ships come together to discuss the final meeting. They arrive in sloops, rowed by the sailors. In the last meeting, the course is determined and mutual agreements are confirmed.

Ship in sight! The Roads of Texel and the world